skip to main | skip to sidebar

My blog has been moved over to a new site.

Please stop by to visit me.  I'm still finishing up things like the blog roll.  You'll find all my old posts have migrated over as well as all comments.
Posted by SciFi Mama at 1:56 PM 4 comments:

I still haven't made a decision on the blog move yet.  I really like the app.  Now to research how easy it will be to migrate over to a new place.  No, tonight's decision is what to take to Antique's Road Show tomorrow.  They will be at the Biloxi, MS coliseum taping for early next year air date.

My family still lives along the Gulf Coast, and my Mom has always wanted to go on the show.  A friend from high school posted months and months ago that it was coming to the Coast and how to apply for tickets.  I think I applied for tickets in January or February, and winners were chosen in March.  The show uses a lottery system.  You apply for the event you would like to attend, and if your email address is chosen, you receive 2 free tickets.  Mom and I were lucky enough to get tickets.

Our ticket time is 2 pm, and we can arrive up to thirty minutes early.  We plan on arriving around 1:30 or so.  We can each bring 2 items with us.  Mom is bringing 2 violins that have been in my Dad's family for ever, or so it seems.  We've also picked a pair of pocket watches that were wedding gifts to my Dad's parents.  That leaves one more item we can take.

We had decided to take a set of dishes.  Ronnie's grandmother has been saving this set of dishes for him.  Every time she goes to give them to him, she changes her mind.  They are fragile and something could happen to them.  We've heard different stories about these dishes.  Our favorite is that Maw Maw's aunt brought them over on the boat from Sicily, and that she had hand painted them.  Sorry, Google search reveals they were made in Japan and sold in mass production.  Turns out the dishes were wedding china for Maw Maw's sister.  We think they were bought at Sears.  Either way, the dishes are still, well, ugly.  We've decided not to take them tomorrow, but as a consolation prize we will bring them out and use the ugly dishes for Thanksgiving.  It's never a traditional meal in our house so maybe they'll be fortunate enough to be used for a taco dinner or maybe chicken wings.  The menu is still undecided.

I called Mom and told her what we decided. Now she's trying to figure out what else she would like to take.  There's a couple of other contenders:  a music box my Dad bought in Japan in 1951 while he was there in the Navy as part of McArthur's honor guard.  Or there's my Great Grandmother's ugly vase.  When she passed away no one in the family wanted it, they all said it was too ugly.  My Mom took it and found out it's a Hull vase, whatever that means, and is a collectors item.   Mom gets to narrow it down and we'll make a final decision tomorrow.  I don't think my 3rd grade baton twirling uniform, or Ronnie's dog head bong he made in high school would be interesting to take.
Posted by SciFi Mama at 9:33 PM 2 comments:

I think it's well established that Paige has a shoe fetish.  She has been obsessed with shoes since she was around a year old.  It really is all about the shoes in this house.  Some mornings I let Paige help pick out my clothes.  It's not a big deal to me.  Especially since I have a hard time deciding some mornings exactly what I want to wear.  Paige has been picking out my clothes based on what shoes I can wear with it.  She has to ask what shoes go with something before she picks it out.  At this point she's mostly figured out what type of shoe goes with what type of clothing.  She knows tennis shoes do not go with a dress or skirt.

Lately Paige has been completely fascinated with my peep toe shoes.  She keeps picking out dresses and skirts that will work with the peep toe shoes I have.  I have a pair of blue and white spectator style pumps with the ankle strap and peep toe.  Then there's the 4 1/2 inch black Candies' patent leather peep toe pumps.  She's picked those out twice this week.  I'm going to have to buy something else to go with the blue and white shoes.  They only match one dress, and I'm getting a bit tired of wearing it frequently.  It's also a bit dressy for work.  The other problem with that is my knee.  The arthritis in my knee doesn't like all these high heel peep toe shoes.  I'm glad tomorrow is casual Friday at work.  I get to wear jeans, a t-shirt and my Converse.  Sounds great to me.
Posted by SciFi Mama at 5:56 PM 1 comment:

I found this link from another blog.  It's all about great Sci Fi actors who were also war heroes.  You can read all about James Doohan, Rod Serling, Alec Guinness and a couple others.  I'm sure you already know I'm a HUGE fan of Rod Serling.  After all, I did name my child after him.  I already knew about his war hero status, which just makes him even more cool.
Posted by SciFi Mama at 7:27 PM No comments:

There's an iPhone app for Word Press, but not one for Blogger.  I've tried to blog from my iPhone, but for some reason Blogger doesn't work well on it.  I have no idea why that happens either.  I can create a new post and title it, but I can't actually write anything.  It makes no sense to me.  I write all of my posts on my MacBook in Safari.  I use Safari on my iPhone.  But for some reason, it just won't work.  I would like the option of being able to blog from anywhere.  There are days at work when I could blog at lunch or when the computers are down.  I would like to be able to blog from a road trip while Ronnie is driving.  I just can't do any of that with Blogger.

I haven't decided yet.  I'm still in the research phase of this decision.  I want to see if I can move everything successfully to Word Press and if I can create a blog that looks appealing to me.  I've already secured my blog name, and that won't change.  If I do move, I'll still be SciFi Mama.  Any thoughts?
Posted by SciFi Mama at 6:48 PM 2 comments:

It's not so much a diet as a complete change of lifestyle.  Ronnie has had high triglycerides for a while now.  He's changed his diet and started working out.  He's running at least three times a week.  We do try to eat healthy around here.  Most meals are made fresh, no pre packaged meals and lots of fresh veggies.  It wasn't enough.  At his last check up the triglycerides are higher than ever.  And now it's time for a complete change.

We've cut pork from our diet.  Good bye bacon, my friend, I will really, really, really miss you.  Also gone are most of the starches, red meat and sugar.  We're now on a diabetic, heart healthy diet around here.  We're going for more of a natural change instead of a medication induced change.  The medicines have too many side effects.  A change of diet and more exercise will give make all of us healthier.

And let's be honest here.  I'm not going to be following Ronnie's diet completely.  Bacon?  Bacon is still my friend.  Paige is not giving up her bacon completely either.  I still drink my 1 can of Coke a day.  There's no way I give that up.  I tried once.  By the third day a coworker put a Coke and told me to drink it before he poured it down my throat.  Mommy needs caffeine.  But I will follow it pretty closely.  Hopefully we can get a little healthier. And just maybe I can lose these last 12 pounds.
Posted by SciFi Mama at 9:48 PM 3 comments:

Blueberry picking season is in full swing.  Most of our blueberries have been picked for us.  A family friend enjoys picking and picks before most of us can get out there and do it.  That's actually OK with me, for the most part.  It's really hot out there.  Last week my uncle delivered a Walmart bag full of blueberries to me at work.  We ate and ate, and I gave some away.  Then we froze the rest.
Yesterday we went to Grammy's house.  Grammy gave us a gallon bag of blueberries.  When we left her house we went to Aunt Glennis' house.  We picked from only 3 of her trees and got another gallon of blueberries.  We've given one gallon away to Aunt Wii.  I still have a full gallon of blueberries sitting in my fridge, and I'm about blueberried out.  We're having a luncheon at work next week and I'm thinking of making blueberry cobbler.  That should get rid of some of them.
Any suggestions?  I need to either use them up or freeze them soon.  We've had blueberry pancakes, muffins and straight from the fridge.  Now I'm thinking maybe a parfait or an afternoon smoothie.  And of course the cobbler for the luncheon.
Posted by SciFi Mama at 9:11 AM 4 comments: 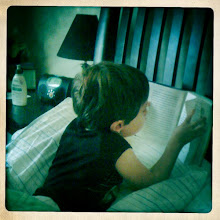 It's all about me

SciFi Mama
I have a wonderful husband, Ronnie, and a 4 year old daughter, Serling Paige. I have an absolute love of Science Fiction. I've moved around quite a bit and have finally settled down into a small town that I enjoy.